The History of Drumore

Drumore was built in 1938-39 for John Frederick Steinman by noted architect Robert Rodes McGoodwin. It was an active farm. They farmed peas and corn, which were canned in the basement by the house staff. It served as his principal residence until his death two days before Christmas in 1980. He died in this house he loved so much in a bedroom on the second floor.

From Jack Brubaker’s book “The Steinmans of Lancaster” “J. F. had searched all over Lancaster County for an old stone house but had found all available properties sited in valleys. He wanted a home on a hill, so he created one. He built his house down from the peak so that one must walk to the top for the best view. On a clear day Lancaster City and the Susquehanna River are visible from the peak.”

Although the family had a retreat on the Chesapeake Bay called Charter Hall, J. F. often found the rowdiness of the crowd that gathered there a bit much and sought a quieter retreat. He built. Drumore Estate just down the road from Drumore Farm, the farmhouse that was purchased by his grandfather, John Frederick Steinman Jr., in 1861.

The Regitzs purchased Drumore Estate on Halloween 1999. It had been vacant for 20  years, so it was a big renovation. The gardens were also restored. The property boasts formal gardens and two fountains. Below you will read more in depth about each room on the 1st floor of the Georgian Mansion. 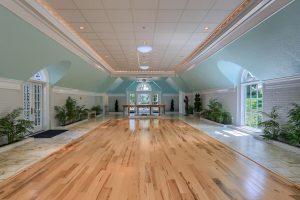 The Natatorium or indoor pool, The Orangery as we call it today, was built in 1960, allegedly to serve as a therapy pool after John Steinman’s hip surgery. It is climate controlled and has a 16,000-gallon pool, which compliments the 70,000-gallon pool outside. The current owners installed a removeable floor over the pool to accommodate small events.

Besides swimming for exercise, Steinman had a walking path marked out in the basement so he could walk several miles indoors. The basement also boasts a full bomb shelter complete with a silo which reaches from the basement to the outside and a billiard room with a fireplace. The commercial kitchen is also located in the basement.

Note: There are 2 bathrooms off the pool, built by the current owners, as well as two located in the entrance hallway. There are 19 restrooms on the Estate. There are 15 fireplaces. All bedrooms, except the servants’, have a fireplace, full bathroom and walk-in closets. 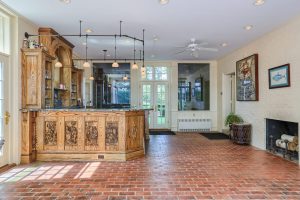 his is the solarium. The Regitzs installed the bar to serve weddings/events. The dark mirrors placed on the walls – which are original to house – were placed there to softly reflect daylight without the harshness of a regular mirror. At cocktail time, Mr. Steinman would carry his drinks on a tray from this room to the dining room. A house staff member would walk behind him carrying his cane. When the servant suggested it would be easier if the servant carried the tray and Mr. Steinman walked with his cane, he politely refused, saying, “No, I’ll carry the drinks”. 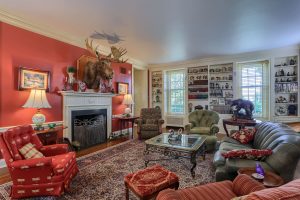 This room was planned as the Library for the house and serves as a TV/sitting room today. There is a stuffed moose above the fireplace. This came from Karyn’s restaurant in California called “The Flying Moose”. Between the Library and the Solarium is a closet which used to be an elevator to take the owner to his second-floor master bedroom. It was converted to a raceway for duct work when air conditioning was installed in the mansion. Note: The story has it that when this house was built, homeowners were taxed on how many doors they had in a house. So McGoodwin, the architect, designed windows that were could be used as doors. 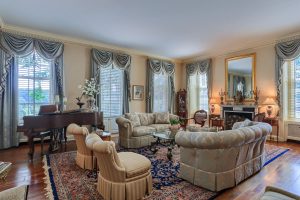 The formal living room is the home to 8 “original” Kincaid’s. Karyn bought them because she is an acquaintance of Thomas Kincaid the artist. It boasts dental moldings and the curtains mimic styles from the White House as well as a grand piano. 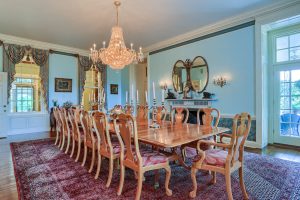 This room is where the Steinmans dined every night. Dining here was a formal occasion. Both Mr. and Mrs. Steinman formally dressed for dinner, he in a jacket; she in a gown – even if it was just the two of them. There was a full, lighted candelabra and finger bowls at every setting. The female house staff members dressed in grey uniforms. They also wore white aprons, white collars and white cuffs. The aprons, collars and cuffs were separate from the grey uniform so they could be starched, and hand pressed daily. The current dining table was custom built for the Regitzs and, with extensions, can seat up to 22. 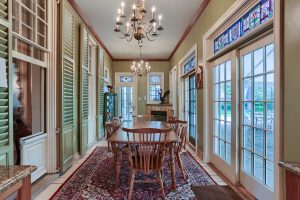 To get to the kitchen, you can pass through the Breakfast Nook.  This nook was added by the Regitzs (it was half of the back porch) as informal, family meal area. There is a fireplace in the corner with intricate, fine stonework that was hand-cut and inlaid. It mimics the butterfly/flower motif of the stained glass the Regitzs had made for the room. 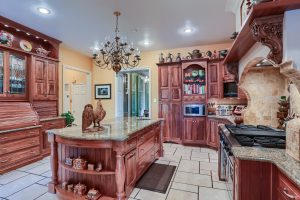 Originally, this was a commercial kitchen use by the staff  to prepare the formal meals required by the Steinmans. The Regitzs converted it into a more family friendly space. Once they began doing weddings, a commercial kitchen was installed in the basement. Beside the kitchen is the original butler’s pantry, where the meals were lovingly plated for the Steinmans. Except for the marble tops, which replaced stainless steel ones, this pantry is original to the house. The drawers were replaced with upgrades and the cabinets were painted. The Breakfast porch is off to the south.

The Apartment or Bridal Suite 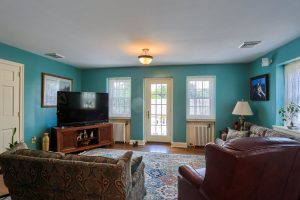 A complete apartment complex lies behind the kitchen which served as the servant apartments. The Steinman’s had 8 servants. The chauffer was married to the 3rd floor maid and they lived in and raised their family in the gate house on the property. The apartment has been completely remodeled and serves as the bridal dressing area today. There is a sitting room, 2 bathrooms, kitchen and 2 bedrooms. Each bedroom has two doors –  louvered,  for airflow and solid for privacy.   All original bedrooms have the 2 doors.

We hope you have enjoyed this quick tour of the first floor of Drumore Estate.

Signup for Our Newsletter